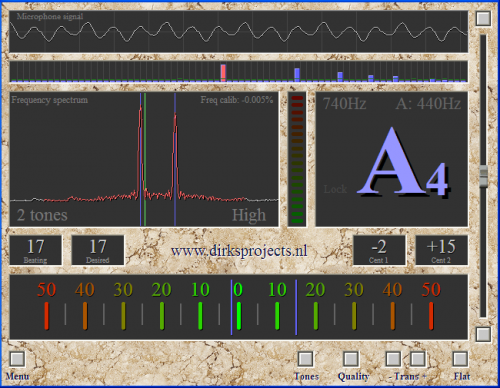 This instrument tuner is accurate, fast and easy to use. Virtually all instruments can be tuned with it.

Please take some time to read this manual. This will certainly save you a lot of time later on. If you find things missing, in error or unclear please send me an e-mail.

This screen displays the signal measured by the microphone. With this screen you can check if your microphone works. This screen is not used for the tuning process.

The frequency spectrum of the note to be tuned

This screen displays the frequency spectrum of the note to be tuned. If an instrument is tuned with beating like an accordion or button box, then the tone actually is built up out of two tones that are produced by two reeds. One tone has a pitch that is a little bit higher than the other's. The accuracy of this screen is high enough to display these two tones as two independent peaks. This means that you can actually see the beating of the tone!
The further the two peaks are apart, the faster the beating. The instrument tuner determines the closest tone from the scale and indicates it with a vertical green line in the middle of the screen. The measured peaks are indicated by vertical blue lines. If a tone is tuned then its frequency should be the same as that of the tone from the scale. In case of a single tone, the highest point of the peak should fall on the green line. If the peak is on the right side of the green line then the pitch is too high and if the peak is on the left side of the green line then the pitch is too low. Due to the high accuracy of the instrument tuner it is not necessary that the peak falls on the green line exactly. A small deviation can not be detected by the human ear. The text in the lower left corner of this screen ('1 tone' or '2 tones') indicates whether the instrument tuner searches for one or two peaks. The text in the lower right corner ('Medi' or 'High') indicates the precision that the tuner is working in. This screen gives valuable information for the tuning process, but is not necessary.

The note to be tuned

The deviation of the tone to be tuned

The beat of the note to be tuned

If an instrument is tuned with beating, like the accordion or button box, then a tone actually is build up out of two tones that are produced by two reeds. To be able to measure these two tones, the Instrument Tuner must be configured for “2 tones” and “high quality”. This can be configured with the two buttons “Tones” and “Quality” on the bottom of the Instrument Tuner. Default, the Instrument Tuner is configured for 1 tone. The instrument tuner will not be able to measure the beating than! As soon as “2 tones” is configured, two blue lines will appear. These lines indicate the pitches of the two tones.
The distance between the two blue lines indicates the amount of beating. The number in the small screen “Beating” now indicates the distance between the two blue lines. So this number indicates the amount of beating. The higher the number, the faster the beating. The desired amount of beating depends on the pitch of the tone and is displayed in the small screen “Desired”. The desired amount of beating for the C4 and the C6 is configurable in the settings screen. The calculated desired beatings of the tones in between are equally divided between these two configured beatings. During the tuning process the values in the small screens “Beating” and “Desired” should become the same.
Configure the precision
The precision of the Instrument Tuner can be set to high or medi (medium) with the button 'Quality' on the bottom of the Instrument Tuner. The Instrument Tuner will be slower in high precision. The medium precision will mostly be sufficient for tuning single tones. For tuning two beating tones, high precision is necessary.

Set the frequency of the A4
With the slider on the right side of the Instrument Tuner you can tune your instrument in another pitch than the standard A=440Hz. With this slider you can set the A frequency between 430Hz and 450Hz with 1Hz steps. All other keys will change evenly. The current pitch (frequency) of the A is displayed in the top of the screen that displays the note value.

The instrument tuner configures its settings automatically as much as possible. This way the instrument tuner is easy to use. So the number of settings is kept to a minimum. By pressing on the button 'Menu' and selecting “Settings” the microphone to be used can be selected and the desired beating can be configured.
If the microphone does not work right away then it is possible that your Windows settings are not configured as they should. The Windows screen, where you can change the microphone settings, can be shown by clicking on the 'Windows Microphone Settings' button.