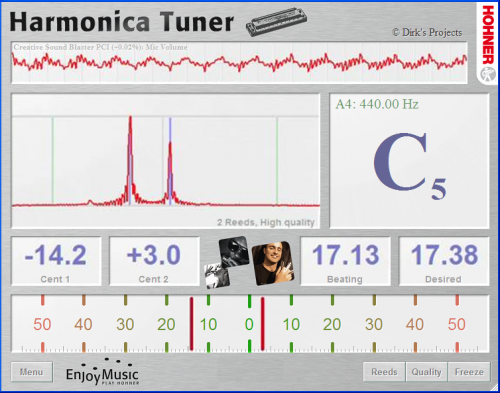 The HOHNER Harmonica Tuner was developed by Dirk's Projects in collaboration with Hohner Musical Instruments and is designed to enable harmonica owners to tune their own instruments.

The tuning process is easy to learn and is clearly explained in the tutorial video.

The tuner software can tune not only single reeds, but also double reeds tuned in tremolo. This unique feature enables one to set the desired beats easily and accurately. Beats are very hard to tune when tuning both reeds separately from one another. With this tuner, both reeds can be measured simultaneously, together with the sounding beats, making it very easy to tune the beats. 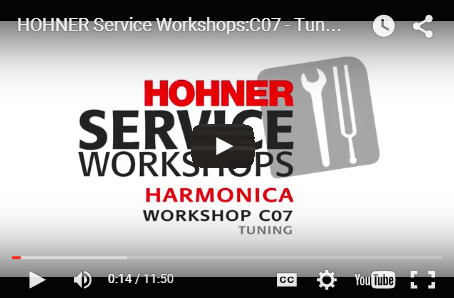 Tune a harmonica yourself to a professional standard

How to tune a harmonica

A harmonica is tuned by filing or scraping small amounts of material from the reeds that need adjusting. A reed's pitch can be tuned up or down using special tools. The images below show the HOHNER toolset that is used to tune a harmonica. 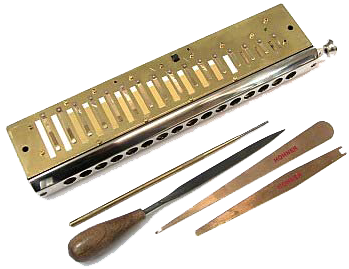 The trial version is meant to help you get a good idea of the possibilities offered by the tuner. The trial version can be used to tune all the reeds of your harmonica. Some features are only available in the full version, like tuning the beats of tremolo reeds and using the tuner in full screen mode. 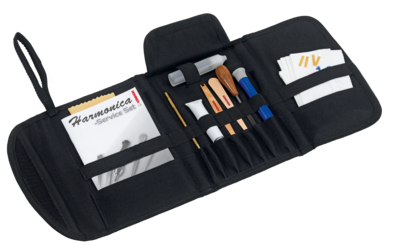 The distance from the microphone to the instrument
The closer the microphone is placed to the instrument, the smaller the influence of the background noise in relation to the sound of the instrument. A shorter distance will improve measurement accuracy.
Digital effects
Some microphones are supplied with software (so-called drivers) which can modify the sound signal by using digital effects. These are effects such as 'echoes', 'hum filters', 'stereo enhancement', 'direction sensitivity' and 'noise suppression'. These effects can distort the recorded sound as a result of which the tuner will not function properly. Therefore effects have to be disabled. On the other hand, microphone settings such as 'boost', 'sensitivity', 'volume', 'gain' and 'balance' are of no consequence.

Using the tuner for the first time 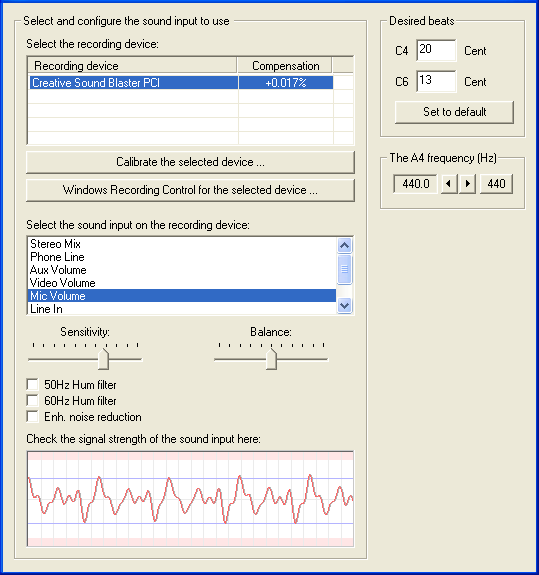 The resulting signal from the selected input is shown in the graph at the bottom. The tuner works best when the input signal is as strong as possible, but it should stay clear of the top and the bottom of the graph to avoid distortion. The strength of the signal can be controlled by moving the 'Sensitivity' slider. When a microphone is selected and its signal is too weak, the check mark 'Microphone boost' can be set to amplify the signal more.

If the stereo input has a "Balance Slider", it should be set in the middle.
The button 'Windows Recording Control for the selected device' opens the sound input configuration screen of Windows. This screen is normally not necessary.

Sometimes a hum (50 or 60 Hz) is audible on the input. This is generally caused by either bad earthing or a poor power supply. It can be taken out by checking one of the hum filter boxes. Not using these filters can result in unwanted detection of certain tones, e.g. G1 (49Hz), A#1 (58,27Hz) or B1 (61,74Hz).
Tool tips
Hovering the mouse-cursor above a button or a window will show a "tool tip". A tool tip is a small text box with explanation about that particular button or window.

The tuning process with the HOHNER Harmonica Tuner

Tuning with the HOHNER Harmonica Tuner

The input signal
The sound signal the tuner uses for its measurements is shown in waveform at the top of the tuner window. The height of the wave indicates the strength of the input sound. If the sound becomes too strong for the wave to fit the window, it will be scaled down. The name of the sound input that is chosen in the settings screen (Menu - Tuner Settings) is also shown in this window. In this window you can check if the input signal is present.

The deviation of the reed's frequency
The reed's deviation from the target frequency is shown numerically in window "Cent 1" and is also represented by a moving red needle (bottom part of the window). In "2 reeds" mode, the deviation of the second reed is shown in window "Cent 2" and is represented by a second red needle. The two sounding reeds produce beats which are shown in the window "Beating".

The A4 frequency
The A4 frequency used by the tuner can be set in the settings screen: Menu - Tuner Settings. All other tones are adjusted accordingly.
Freeze the tuner
The movement of the tuner needle, numbers and graphs can be stopped, to enable easier reading. Just click the "Freeze" button. Hitting the spacebar will do the same.

Detectable pitch differences
The smallest pitch difference detectable by the human ear is approximately 2 Hertz. The accuracy of the tuner of ±0.1 Hertz is of a different order of magnitude. This high degree of accuracy is necessary to measure the beatings between two reeds. A change in pitch difference of more than approximately 0.1 Hertz causes a noticeable change in the speed of the beats.
Automatic calibration
The tuner uses the sound card for its measurements. To compensate possible errors in the sound card, the tuner carries out an automatic calibration. Manual calibration such as those often possible on conventional tuners (with a screw for example), is not necessary. Because of this the measurements of the tuner are always accurate.